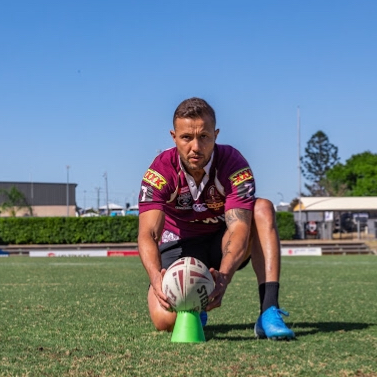 I am a former elite rugby league player who would love to encourage and mentor younger athletes to work towards their goals and aspirations as well as to share my knowledge and give back to the game that’s given me so much. My main position in rugby league was halfback and I had the honour of representing QLD in the State Of Origin arena, 2004 and 2008.

*I am currently unavailable for coaching* I began my career a the ripe age of 6, for the love, enjoyment & friendships. I was grateful enough to be able to continue this sport on as a fulltime career. I am very fortunate to have achieved both individual & team highlights, however my ultimate highlight for my rugby league career would definitely be winning the 2005 NRL Premiership. After the completion of my professional career, I wanted to continue the legacy of rugby league by working at the Brisbane Broncos as a mentor for our Beyond The Broncos Indigenous Community program. I advocate healthy lifestyles through my ambassador role with Deadly Choices, ambassador for Touch Football, radio commentary for NRL Nation & keeping fit through my involvement with Touch Football across Australia. Playing Highlights: Indigenous All Star Selection: 2010 – 2012 Australian Test Squad Selection: 2005, 2008 QLD Origin Selection: 2004, 2008 Prime Ministers XIII Selection: 2007 – 2008 1998 North Queensland Cowboys Rookie of the Year 2002 Brisbane Broncos Clubman of the Year 2005 Dally M Awards Captain of the Year 2005 Clive Churchill Medal winner 2008 RLIF Team of the Year (Halfback) 2010 Dally M Awards Halfback of the Year 2010 RLIF Halfback of the Year

Excellent session which was well planned, organised and a lot of fun. My son Jackson had a great time learning some valuable skills. Scott was very down to earth and an absolute pleasure to talk too. Jackson can’t wait for his next session. Highly recommend.

Words can’t describe the WOW experience my son Dallas and I just had with Scott Prince! The Magician It was better than LEGO😁 It was PRiCELESS what we gained in just an hour about Rugby League.If you want a great Coach/Mentor for your child, Scott is definitely worth it.

Jayden had a fantastic session with Princey. Scott ran through some play options and communicated extremely well. So very supportive and followed up with keen interest on how Jayden played. Thanks Princey. Jayden will be keen to have another session again in the future!