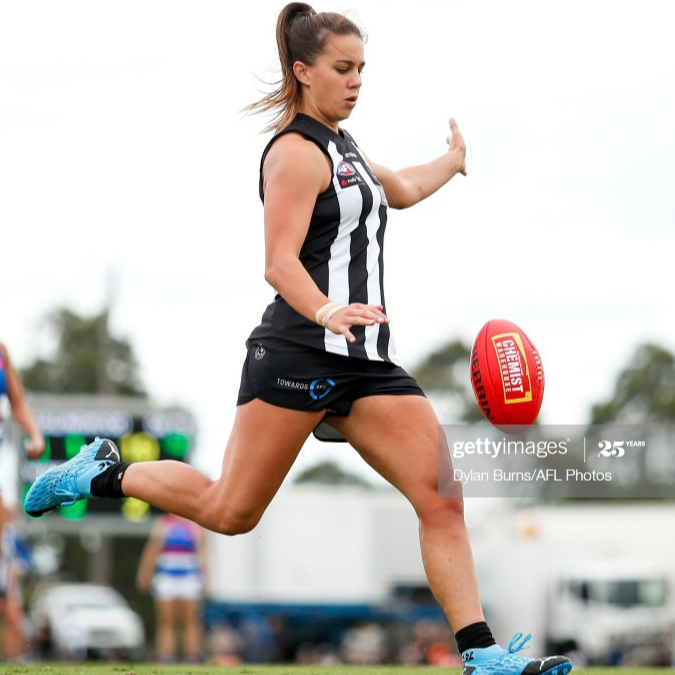 Collingwood All Australian Defender, Club Best and Fairest, and AFLW Rising Star. Drafted by Collingwood in 2017 with Pick 3. I absolutely love football, and even more so passing on my knowledge to younger generations.

*I am currently unavailable for coaching* My first sport was Basketball and I made the decision to turn down a US College Scholarship to pursue a possible career as an AFL Player. I played for the Calder Cannons in the inaugural Womens TAC Cup Season. At the end of the season I was announced as the joint winner of the Best & Fairest and the winner of the leading goal kicker award. I then started playing for Diamond Creek in the VFLW being one of the leading goal kickers in the competition, as well as runner up in the Best and Fairest at the end of my first season. After being drafted to Collingwood as a forward, I was shifted to a role in the backline for my first season of AFLW. While it was something new to me, I loved the change and thrived on the change. I was Nominated for the NAB Rising Star in my first game against Carlton. After my first season in the AFLW I was awarded with the AFLW and AFLPA Best First Year Player, was named in the All Australian Team, and also won Collingwood's Best & Fairest Award. I was also named the 2018 AFLW Rising Star. I am happy to coach males and females of any age and ability level who want to improve their skills and confidence in the sport of AFL or Basketball. I am an easy going person and I love being around those who share a similar passion for AFL and want to learn how to improve. I feel coaching is a way for me to help give back to the game that I love so much and has provided me with many opportunities. I would love to help future generations improve not only their skills but their confidence when playing the game.

Chloe's session with my 13 year old niece, Issy, was a massive thrill for her. She identified what Issy needed to work on, gave appropriate advice and made sure the session was highly engaging. Above all else, Issy had an absolute ball, which all comes down to how well Chloe engages with the athlete. Would highly recommend.

This was a birthday present for my 9 year old who is desperate to play girls footy but her current club is struggling to have enough girls to form the team... so not only did she need the skills but she also needed the confidence boost to know That one day she could be just like chloe! Absolutely amazing experience And she enjoyed every second of it! Chloe was fantastic and I would highly recommend anyone thinking of doing a training session or giving one as a present to do it!!

Chloe was awesome! She listened to what I needed help with and explained everything step by step. She was very professional and I had heaps of fun. She kept in touch leading up to the session. I will definitely book another session with Chloe in the future.