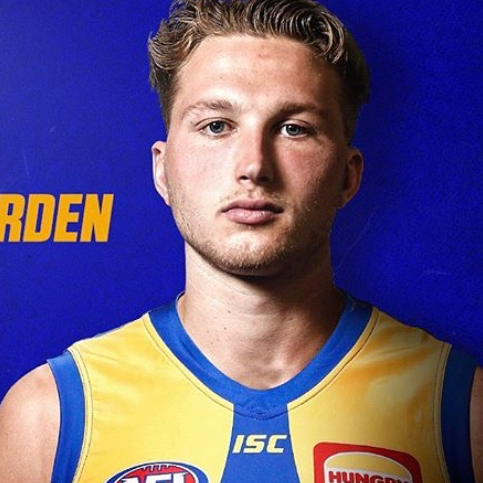 I debuted for the Brisbane Lions in 2017 where I was a Rising Star Nominee for both 2017 & 2018, becoming just the eleventh player to do so in the history of the award. I've since moved to the West Coast Eagles where I have been able to continue my career as a half back with 70 games of AFL experience. I love the game of AFL and I am passionate about sharing my knowledge and expertise with the next generation of AFL players.

I started playing AFL for Barwon Heads, before moving to St Joseph's Football and Netball Club in 2009. In 2014, I was selected to represent Victoria Country to play at the National Championships. I was then selected into the Geelong Falcons TAC Cup team. After breaking my leg in my 3rd game of the 2016 season, I missed out on playing in my draft year. I ended up being #23 Draft Pick in 2016 for the Brisbane Lions. Playing in the AFL, is something I have wanted since I was young and I was extremely grateful and excited to begin my career with the Brisbane Lions. I spent 4 years at the Brisbane Lions and played primarily across half back, learning the skills of the trade off great players such as Daniel Rich and Luke Hodge. In 2020 I was recruited to my current team, the West Coast Eagles where I continue to play as a playmaker across halfback using my skillet to help chase my first AFL premiership. I am passionate about coaching and I am keen to pass on my knowledge that I have learnt off some of the greats of the game and in my own 6 years of experience to help athletes reach their full potential and gain confidence in their ability.

Alex was fantastic. He really engaged with Jake which was as important as the skills he taught. Jake came away with a huge smile on his face and at training that night for his club he was kicking better than he ever has. Thanks again Alex.

Alex provided a fun and laid back coaching session that offered heaps of tips and encouragement to help Indy in her footy dream. He went above and beyond what was expected and made Indy’s 9th Birthday one to remember! Indy’s already keen for a second session! Thank you Alex and Playbook for providing such an awesome experience.

Alex was fantastic I could not have asked for a better late birthday/Christmas present for my son the smile on his face was priceless and after the session my son gave me the biggest hug and said thanks so much .Alex helped Lucas with his kicking technique as this was an area letting his game down ,was so patient with him the whole time as well as encouraging him throughout the whole experience. I think Alex may of found his latest number 1 fan!😊So reliable and so approachable made us both comfortable the minute we meet him . Thoroughly recommend Alex to anyone wanting to make their child's year unbelievable as my son said the best present ever 🎉