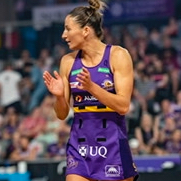 I play Centre for the Queensland firebirds. I have represented Australia at 2 Commonwealth Games and a World Cup. My areas of expertise are mid court specialist, defence and the fundamental skills of Netball. I love coaching and seeing athletes improve and gain confidence in their ability.

I started playing Netball in NSW for Fairfield City Districts Netball Association. I have moved through the NSW Representative pathway and represented Australia at the World Youth Cup in 2013, later that year I made my debut for the Australian Diamonds. I have previously been a part of the QLD Firebirds, winning two ANZ premierships. Playing Career: Australian Diamond #159 2013- 2019 Collingwood Magpie #7 2017-2019 QLD Firebirds 2013- 2016-2021 present World Youth Cup Team 2013 NSW State Teams 19/U-21/U AIS Scholarship Holder 2012

A surprise for my daughter Ava - she was thrilled to not only meet Kim but spend an hour training with her and chatting about all things Netball and life. Kim was fantastic and Ava couldn’t wipe the smile off her face. An amazing experience.

Seeing my daughters face when she saw Kim arrive was priceless, Thanks Kim for all the drills and ideas to use in games. Amazing how in her next 2 games she played after the training session we could see a big change in her game. Thanks again

My daughter, Jenna absolutely loved her session with Kim. Kim gave her so many drills and things to practice, gave her advice for her future games and for her body, and was just such a great role model. She had the best time ever

Kim was really good with my daughter and took her through warmup, skills and a cool down. My daughter (who is 11) said that Kim taught her some things that she can definitely use in a game. I would not hesitate to recommend Kim.

What a brilliant experience! Poppi (14yr) who eats, breathes and sleeps netball, joined Kim Ravaillion for an hour of coaching yesterday and thoroughly enjoyed it, from minute 1 to minute 60. Kim was professional, energetic, switched on to the needs of a 14yo re training/coaching and offered some great insights into the pathways for girls wanting to make netball a career. Thanks to Kim, Poppi will be implementing some great new moves on the court! We will be booking again, thanks Kim and Playbook for making this option available. Fiona (parent of Poppi)