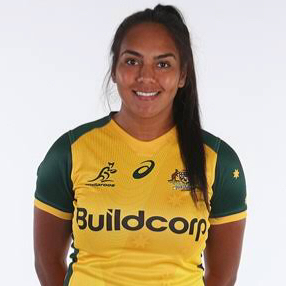 I am an Australian Rugby Sevens and Rugby XVs player with a breadth of experience. I played my debut game for the Australian Jillaroos in 2015 before being selected for the Australian Women’s Rugby Sevens team later in 2015 and the Australian Rugby XVs in 2017. I also debuted for the NSW Waratahs women’s team in 2019. I am dedicated to creating a positive learning environment in which aspiring athletes can develop and refine their rugby skills and knowledge. Through private coaching sessions I am excited to pass on my experience to help athletes reach their goals!

My passion for sport began in athletics and I trained professionally as a track and field athlete until after finishing high school. I was serious about becoming a sprinter but after a one-off fill in for my sister's rugby team I was converted! I really loved the drive from competing as a team and I couldn't get enough. I started playing league at the Doonside Roo’s football club in NSW but after 2 seasons, I was selected for the Indigenous All Stars team and then the Australian Jillaroos. I have since been competing internationally for both the Sevens and XVs in competitions such as test matches, the Pacific Games, numbers of World Series seasons and World Cups. My coaching career began in 2014 when I coached a junior league squad for 2 years. The most important lessons I try to teach an aspiring athlete is to build resilience, confidence and to get them being comfortable with failure. No matter your skill level or your age there is always something to learn. I love mentoring younger athletes and watching them implement these new skills into real game situations.

My daughter loved it.Mahalia was really informative and thorough with the way she coached my daughter..really looking forward to seeing her progress under Mahalia's guidance.seeing my daughter's confidence grow after one session was pretty cool to see,I will recommend her highly and will share with others out there